Our first club night outing took us to one of the most popular tourist attractions in Northern Ireland, the Titanic Building and surrounding area. We met up at the Loughview park and ride in Lurgan and travelled down to the carpark at the SSE Arena. We walked from here to the far side of the Titanic Building stopping at the side SSE Arena to take shots of the Lagan and bridges.

The marina also got captured as was the SS Nomadic. 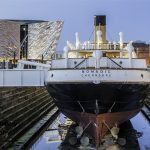 Then it was on to the Titanic building itself. Love it or hate it there’s no denying that it’s different. The club members photographed every inch of the building and some came up with some unique views of it.

All in all it was a very enjoyable trip out. Definitely one place I think we will return to. 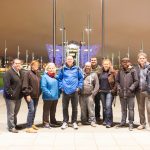