September has come and gone and to be honest it was an intense one for the club. Normally we operate a 2 week cycle of meetings but it was decided that for the first month, September, we would have a weekly meeting to help introduce our new members to the club.

The first meeting on the 7th was an open night for returning and new members. This year attracted quite a few new members which was great to see.

The 14th again was a session geared towards the new beginners in the club with a presentation and discussion on ‘The Exposure Triangle’ given by one of our members Michael Carbery.

As most will know NIPA have 5 competition rounds and the 21st saw us selecting the images that will represent the club in the first open round. For this we had invited Trevor Craig along to judge the images.

The 28th was our first guest speaker of the season, Martin Spackman. Martin is a past president of NIPA and gave a very good presentation and also brought along many mounted prints. 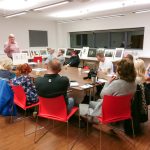 Martin telling the story behind some of his printed images 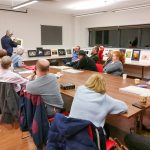 Trevor judging our images for the first NIPA round