It’s been a very busy few months for the club. Back at the end of November we played host to the 3rd Round Adjudication of the NIPA Interclub Competition. This was held in the YMCA in Lurgan. It was very well attended and if I’m honest we did put on a very nice spread of refreshments. 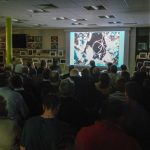 Presentation of the PDIs 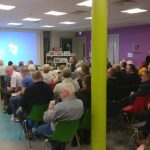 Large turnout for the 3rd Round Adjudication

We also had a guest speaker in the form of NIPA President Vittorio Silvestri. He presented a talk on some of his recent travels, in particular, to Iceland and Praque. Very enjoyable and informative. 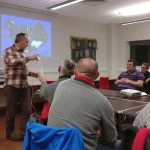 Vittorio Silvestri talking about his trip to Iceland

We had a couple of practical session in the form of a night of portraiture shooting, both studio style and off-camera flash and a night at Oxford Island doing some light painting.

Our two models for the portraiture evening, April and Jessi, were brilliant. We split in to two groups with one group shooting in a studio type environment – backdrop, reflector, studio lights etc, while the second group shot in and around the Brownlow Hub using off-camera flash. 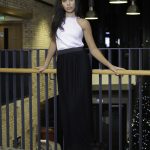 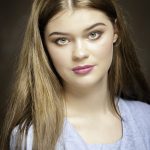 In the remaining time up to now we have enjoyed many competition nights and have had a number of judges in to critique our work and select images to put forward to the NIPA Interclub competition.

In the run up to the summer break we still have our own novice competition, some technical sessions and at least one outdoor portraiture session to come.